Download the offline Chimpact Run XAP | APPX | APPXBUNDLE files for Windows 10 Mobile | Windows Phone . You can download FREE to install manually now. Windows Việt only share the original XAP | APPX | APPXBUNDLE installer for apps and games. All the Windows 10 Mobile | Windows Phone apps & games here are free for home or personal use ONLY. Chimpact Run is the property and trademark from the developer of it, all rights reserved. Please do not reupload to Microsoft Store. 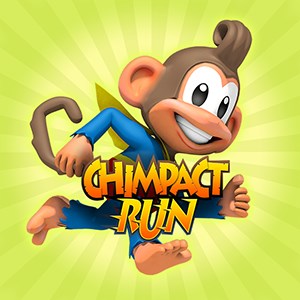 Totem, Lord of the Forest, has been enchanted. His precious gems have turned into fireflies and flown away. Your goal is to catch those flittering fireflies and return the gems to Totem.

Play is simple: Tap to jump, tap twice to double jump, and hold to glide as you descend. Race your way through the tropical island worlds, collecting bananas as you run. Cash them in for coins and gear up before each level to unleash a massive array of power-ups. Soar on magic carpets, ride on rockets, skate on roller-boots, and even wear your own superhero costume.

Be careful as you go – the jungle is filled with hostile creatures and deadly traps, although the right power-ups can turn them to your advantage.

Chuck isn’t alone on this mission; extra characters can be unlocked, and each one will boost your banana bonus.